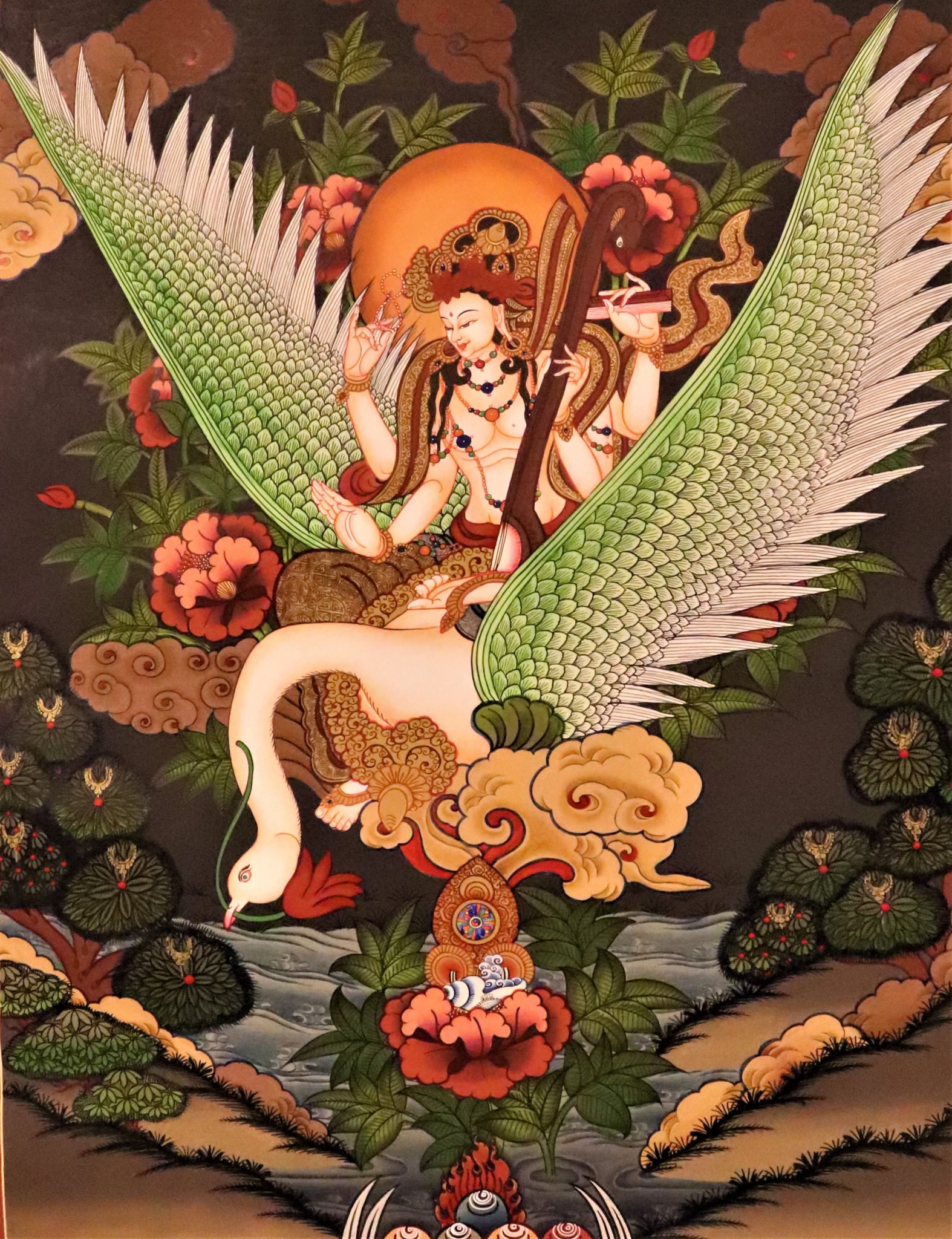 Swaraswati Thangka - Newari Style is handpainted with love in Nepal. Saraswati is mostly worshipped for knowledge and education.

Saraswati Thangka – Newari Style is handpainted with love in Nepal. Saraswati is mostly worshipped for knowledge and education.

Saraswati is the Hindu goddess of knowledge, music and all the creative arts. Saraswati is called the Mother of the Veda’s and the repository of Brahma’s creative intelligence. Saraswati is also called Vak Devi, the goddess of speech. Dressed in white, Saraswati holds a mala and a palm leaf scroll, indicating knowledge. Saraswati usually rides a swan and sometimes a peacock, while playing music on a veena. Students worship Saraswati to perform well in examinations. So on a day devoted to Saraswati known as Shree Panchami, all Hindus go to the Saraswati temple.

She has one face and two hands holding vina -a stringed instrument and a book. Her legs are crossed and slightly raised and the vina is placed on her lap. She is white in color, seated on a simply drawn large white lotus. Her legs are drawn up in an unusual cross ankled posture with her knees raised, presumably a posture for musical performance. She is popular with Buddhist, Hindus, and Jains as well.

The Buddhists regarded as one of the twenty-one emanations of the goddess Tara. It is said that she will help his disciples to increase wisdom and eloquence. Those who forget the meaning of sentences will immediately get her help in remembering. She is usually seated on a lotus seat with one leg pendant, playing vina.

She is primarily associated with Brahma, her vehicle is a swan. When she is depicted in four arms form, she holds a book, a vina, a rosary, and a lotus. Saraswati is the goddess of learning, wisdom, and music.

Her popularity spreads far beyond the borders of India to Tibet, China, Korea, and Japan. Her ornaments are simple and restrained, but a narrow, dark green scarf creates a flurry of movement around the figure. It floats in an arc behind her slightly titled head, then winds around her arms and drifts off in a circular maze to left and right.

The harmony of the worldly and the divine seems to express the Buddhist belief that the ordinary and the transcendent(surpassing), samsara and nirvana, are one beautifully balanced reality.